skip to main | skip to sidebar

I first heard of U.S. Christmas on the day I interviewed Steve Von Till, from Neurosis, for this blog. He told me that Neurot Recordings was going to release this band that "just play really dark, dirgy, very spaced out Rock music." It is the perfect description for U.S. Christmas. They really blew me away at this year's Roadburn Festival and therefore I was very happy when Nathan Hall, U.S. Christmas' lead singer agreed to do an interview. Apart from the good news for vinyl enthusiasts, he had something to tell about the Southern influence on the lyrics, musical influences, news on new releases and many other things. 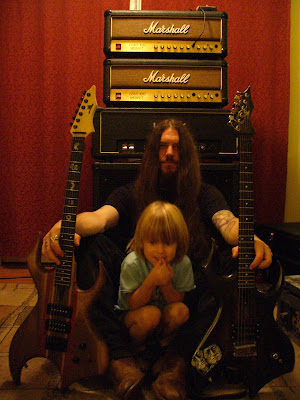 R.: Could you summarize U.S. Christmas‘ history? How did you guys get together in the first place? Did you know each other beforehand? Did you live in the same town?

Nathan Hall: We have been a band for about eight years, Matt [Johnson (Theremin, Synth)] and I both live in Marion. Some new people are in the band now: Josh [Holt (Bass, Guitar)] and BJ [Graves (Drums)] live in Knoxville Tennessee, Justin [Whitlow (Drums, Synth)] lives in Asheville, and Chris [Thomas (Bass, Guitar)] lives in my hometown Spruce Pine, North Carolina. Like I said, the band has been around a long time, everything is sort of a blur at this point. This is the only band I haver ever been involved with. Our town, Marion, is a small town in western North Carolina.

R.: Recently, there have been some changes in the band that has been hinted at on your Myspace blog. Could you talk about what has changed for U.S. Christmas and why?

Nathan Hall: That is a reasonable question, but we are not going to discuss that publicly.

R.: Eat The Low Dogs is already your fourth album, with former releases on a Russian and American label, plus one self released album. From your standpoint, what has changed for the band since Neurot Recordings released the latest album? Are the three former albums still available?

Nathan Hall: Things change constantly in this band, but I think that is universal. But to answer your question, Neurot opened a lot of doors, it is hard to imagine where we would be without them and without Neurosis. We've opened for Neurosis several times, once with them and Mastodon. We've played big festivals with them in the US and overseas. To some degree, we are known all over the world now. The guys in Neurosis have been our mentors in a lot of ways, and that is a huge honor. We have been dealing with them for years now and it is hard for me to remember how it was before. As for cds, I think RAIG might still have some cd copies of Salt The Wound left, and I'm Better Than Everyone Records is going to release it on vinyl soon. The vinyl won't have the awesome red dog artwork that the Russian artist Victor Pushkin did, but it looks like a really good artist is going to do the vinyl design, and if it works out then the cd and LP will each have their own unique artwork. Keep an eye out for that. Of course, Eat The Low Dogs is still in print, and I'm Better Than Everyone is going to release the vinyl version as well very soon. The self released stuff is out of print, no plans to re-release it.

R.: From the few printed lyrics in the Eat The Low Dogs booklet, I had the feeling to be reading an excerpt from a Southern novel, like William Faulkner or Cormac McCarthy. What kind of influences did you have writing the lyrics to the album?

Nathan Hall: That is a huge compliment, and Cormac McCarthy - particularly his novel Blood Meridian - was a huge influence on that album. I have read William Faulkner for years, many other southern writers as well. Flannery O'Connor, James Dickey, and Robert Penn Warren are other favorites. I am an avid writer and reader, I am actually in grad school studying literature. You hit it right on the head actually, I am a southern person and very much influenced by the literary history of the south. But at the same time, I never set out to do anything, it just sort of happens and I go with it. A lot of it is a mystery to me.

R.: From the lyrics that I can understand on Eat The Low Dogs, it almost seems like a story told in different parts with a concept behind. What kind of themes does Eat The Low Dogs cover?

Nathan Hall: Right again, there is always a concept or theme that emerges when we write an album. Not necessarily a story - but a clear idea that develops as we write. For Eat The Low Dogs I would say as a whole it involves: cycles of violence, sadness, loss, some Cherokee mythology, and human darkness. And the idea that living things become vicious in chaotic and stressful situations. We turn on ourselves.

R.: You have mentioned several times that a USX live show can be very chaotic, yet it accomplishes to capture that raw energy that the music evokes. What is the difference between recording and playing a show for you? Do you have any “guidelines” before going on stage to play a live show?

Nathan Hall: We never have any guidelines live, and crazy things happen sometimes. I don't even like to have set lists if I can help it. But recently we've been focusing on getting the best live sounds we can. We have put a lot of thought into our rigs and everyone sounds really good as a result. We are a band full of gear hounds. Having the best gear ensures that you get a good sound. That's why I never hassle sound guys for "more guitar". I just turn up my amps. Recording is different of course, but we are very open during that process as well. Lots of things happen that we could never anticipate. But I wouldn't want to know the future in advance.

R.: It is known that the band name comes from a Sam Peckinpah movie and in another interview that I have read you said to be inspired by bands like Neurosis, Melvins, Neil Young and Hawkwind, to name a few. What other bands and movies to you consider to be an inspiration? What has caught your attention recently?

Nathan Hall: Caustic Resin is possibly the biggest influence on me as a guitar player. Brett Netson, the guitar player and songwriter in that band, has been a constant source of inspiration for the last decade. He has the best big, warm, trippy tone. Nick Cave and the Bad Seeds were a big influence on the album we just recorded with Sanford Parker, it is called Run Thick In The Night. Townes Van Zandt was also a catalyst. As for recently, we play with so many great bands. I guess I could name a few, but I'm sure to leave someone out. But here goes: Minsk, OM, Wolves in the Throne Room, Kylesa, YOB, Inter Arma, Generation of Vipers (our rhythm section now), Pontiak, Saviours, Grails, Dark Castle, Across Tundras, Baroness, RWAKE, and Weedeater have all left an impression.

R.: What happened to uschristmas.net? The last time I checked it was offline.

Nathan Hall: It was a pain in the ass so we abandoned it.

R.: What is next in line for the band? Can we expect a new album?

Nathan Hall: New album is done. More on that later. We also have a Hawkwind tribute project that is complete, Minsk and Harvestman (Steve Von Till) are on that as well. And we have a live LP coming out on I'm Better Than Everyone Records. And a tour with Baroness this fall.

R.: The last words belong to you:

Nathan Hall: There are several people who have supported us and made our custom gear: Brent Monson/Monson Guitars has hooked me up with two excellent instruments, Ear Candy Cabinets has built gear for both Matt and myself, Emperor Custom Cabs made my two excellent 2x12 cabs, and our friend/guitar tech Robert English in Marion NC has kept our gear solid and running for the last eight years. Thanks to all of them. 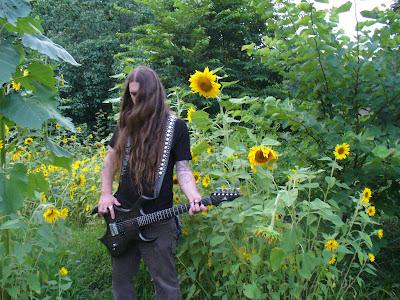 Great interview!
Would you be interested in cooperating with us?

Great interview!
Would you be interested in cooperating with us?

R.
'Nightseminar - music interviews' is a blog where you can read transcripts of Interviews I did with various artists during the time I hosted a Radio show on a local student Radio station in Stuttgart, Germany called 'Nachtseminar' (which is German for: Nightseminar) plus other interviews I will do in the future. If you want to use parts of the interviews you can do that but please give me some credit. If you want to use whole interviews you can do that too but please contact me first.